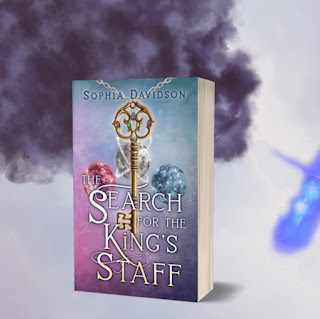 Darkness devours the Spirit Realm. Burning within Cierra’s memory is a childhood encounter with a powerful spirit who chose her to find the King’s Staff, an ancient relic with the power to terminate the darkness before it moves from the Spirit Realm into the realm of man. When the Moon Trio align on the eve of her Coming of Age, the celestial event brings soldier sent by the King of an opposing nation to her home. With her cousin, James, by her side and years of training in her wake, Cierra must risk everything to voyage through uncharted wilderness and find the path to the King’s Staff, teaming up with a princess and an assassin to outrun those who would prefer the staff remain lost – all while learning to control the magic within the key pendant the spirit gave her. If the Key’s power doesn’t destroy her first. "A Song of Hope" is book one in "The Search for the King's Staff" Series.

Isn't her cover absolutely gorgeous?! 😍😍 *swoons over the colors and sparkly diamonds*

What inspired you to write The Search for the King’s Staff: A Song of Hope?

Picture a girl sitting at my classroom desk surrounded in white walls. Picture her on a pasty school bus seat that sticks to unabashed thighs whenever the leather soaks up too much sun. She’s staring out the window, blocking the noise around her out and daydreaming about adventure. Well…that was me. Let’s just say, the earlier versions of “The Search for the King’s staff” were much different and written by a thirteen-year-old. Cierra, my protagonist, was based on myself back then, and the voyages she went on were things beyond my reach. The story started out as my way of getting away from it all, and as the years went by, Cierra evolved into her own person who made her own decisions with her own hopes and dreams, and the story into something that I realized could be shared with the world.

How many books have you written?

Currently, I’ve completed two books, “A Song of Hope” and “The Scarlet Phantom” in my five to six book series, “The Search for the King’s staff,” and I am plucking away on the third one.

Was The Search for the King’s Staff: A Song of Hope your first book published?

What is your writing process? Are you a plotter or a pantster? When do you write best?

Mm…I lean heavily towards the plotter side of things. I do plan some since I know where the story is going. I never make a decision without knowing where I’m taking the plot and the characters.

Who was your favorite character to write, and why?

This is the hardest question so far! They are all dear to my heart, but I’m gonna have to say my protagonist, Cierra. She’s blunt, sarcastic, and has a sense of humor that can lighten up any dark situation. (At least according to my reads.) I’m pretty mean to her in the book with the things I put her through. With all her flaws and with all her mistakes, she has one trait that makes up for everything. The very trait that book one is named after. Her ability to keep hoping and looking forward, believing things are going to turn out. Despite all the odds, her flaws, and her own lack of ability being against her, she stays so positive.

What was your favorite moment to write in A Song of Hope?

Definitely when Cierra first climbs onto her mentor’s dragon Garni. I feel like I really captured the wonder she felt and all the sensations she experienced. It was so much fun to imagine, from my experience on horseback, what it would be like to ride a real fire breathing dragon through the sky. A close second would be a scene at the end of the book, which I don’t want to spoil. It’s when Cierra grows past her flaws and learns that life lesson that will help her through the rest of her quest.

What movies or books would you say are similar to A Song of Hope?

With dragons, magic, and grand adventures, I’d say books like “Harry Potter” “The Lord of the Rings” and “Percy Jackson.”

What is A Song of Hope’s theme song?

Do songs that I wrote count? I wrote an instrumental on the keyboard, named after “A Song of Hope.”  You can find it on my website.

What is Cierra’s theme song?

Again, does a song I wrote count? :)  I wrote a song lyric called, “Looking for a Fighter” inspired by Cierra’s character arc. The lyric are also posted on my website if anyone wants to check them out.

How did you come up with your world?

Asrial is inspired by quite a few different cultures around the world. The buildings in Torrance for example are heavily Mayan inspired. Sometimes I took a real-world tradition and gave it a twist. For example, the Coming-of-Age Festival is like a Jewish bar mitzvah or a Mexican Quinceanera, but the celebrated must set out into the jungle with a tiny little crossbow-like instrument called a Quinv and hunt a small type of dragon, which will earn them a name/title. Meanwhile the community celebrates with food, drink, dancing, and games.

If your book was a dessert, what would it be?

A Song of Hope would probably be a smore’s. Because like a marshmallow, it takes the gooey messy parts of life and crisps them up over a steamy hot fire. It pushes them together with the richness of chocolate and the solid fountain of the graham cracker to make something delicious.

If you were to give new writers advice, what would it be?

Don’t take criticism from people who haven’t read your book! People who know you will tend to judge you based on how well they think you can write and not based on their observation of your work. This isn’t always the case, and there are many of your friends and family who will encourage you ever step of the way. I could have let this type of criticism get to me, but then I realized that if they haven’t read it, then how do they know that? There's a proverb in the bible that says, “He who answers a matter without first hearing it, this is folly and shame to him.” I only listen to critics who have read my book, and then I carefully consider whether that person is saying that because they know what the heck they are talking about, or they’re the type of person who just likes to hear themselves talk and criticism makes them look smarter than they are.

Lastly, be kind to yourself and realize that everyone, even the best writers, are still learning. Be patient with the story you’re working on and don’t be afraid to kill your darlings or add fine details, making sure they pull the story ahead and not drag it back.

You can find Sofia's book here and visit her website here!

Popular posts from this blog

Cover Reveal for Yours Truly! 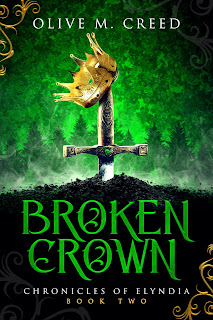 Eeeee!! Today's the day! Broken Crown's gorgeous cover is live! Isn't it beautiful??? Molly from  We Got You Covered  did an amazing job!  Nobody is safe forever. The last thing Torrin wants is to ask pirates. But when tragedy strikes the Anathemans, he has no choice but to go to the people who are more likely to kill him than help. Cyprian struggles to balance being a Shadow for one king, and a spy for another. He doesn’t know how long he can keep up the façade. One thing is clear, though: he can’t slip up. Broken Crown is the second book in Chronicles of Elyndia, a clean, young adult Christian fantasy series that follows a dethroned king and his ragtag group of friends as they fight to regain their home. You can  pre-order Broken Crown here! Here is an honest review of the content you will find in Broken Crown. As a reader, I always loved to find reviews about books I was looking at that listed everything I might be concerned of. And so, as an author, I will be posti
Read more 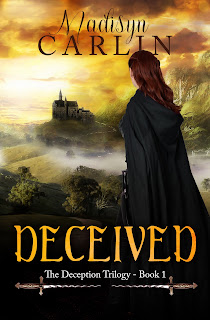 Hello, everyone! I'm super excited to be a part of the Launch of Madisyn Carlin's new book, Deceived! In a land built upon lies and deception, uncovering the truth can be deadly. Therese Westa is sick of death, but taking lives is what provides for her younger sisters. When a client approaches her with an unusual request, Therese takes the job offer, which includes the condition of “no questions asked”. As Therese uncovers the reason for the request, she is faced with a choice: kill an innocent man or save her sisters. Therese’s hesitation to carry out the assassination thrusts her into the aftermath of a dangerous chain of events. Caught between security and truth, Therese must choose where her loyalties lie, for the answer will determine who survives. Deceived is a New Adult Christian Allegorical Fantasy.  Doesn't it sound amazing?!?! I'm definitely reading this book just as soon as I get my hands on a copy! ABOUT THE AUTHOR:  Madisyn Carlin is a Christian, homesch
Read more

Olive M. Creed
Hello! I am a young adult writing a clean, young adult series. When I am not writing, I can usually be found in my chicken pen being swarmed by eighty-five chickens and thirteen ducks (yes, I know, that is a LOT, lol!)